The Chamber Pot that Changed History 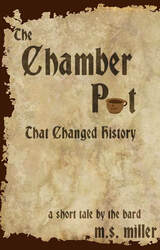 The foul-smelling mixture sloshed back and forth as the brothers moved into position above the gallery.

"Do you think he'll be angry with us?" the young boy, Henry, asked his older brother.

William chuckled. "Of course he will be. But that doesn't mean it won't be funny."

Below them, their oldest brother, Robert, was engaged in a game of dice with some friends. The game was rowdy, the noise muffling the sound of Robert's two brothers sneaking into position above them.

"Ugh," Henry groaned as he caught a whiff of the contents of the full chamber pot. "It smells awful."

"Yes," Henry replied. "I'm going to yell to get their attention, and when they all look up, you're going to dump the pot on Robert."

William nodded and smiled. The prank had been his idea. It wasn't difficult for the teen to convince his nine-year-old brother to join in on the fun.

He slid over, positioning himself above his brother's head. William was never particularly close to his brother, the eldest son of the king. Robert, a young man in his 20s, was impetuous and cocky, far more than a man of his short stature ought to have been in William's opinion.

"Ready?" he asked Henry. The boy grinned widely, moving his hand over his mouth to stifle a laugh.

Henry took a metal helmet and banged loudly on it.

Robert instantly looked up to determine where his little brother was.

On the signal, William heaved the side of the chamber pot, sending its contents gushing onto the men below. His brother Robert was not spared, he wiped the urine from his face, which was now beaming red with rage.

"William!" he screamed. "You scoundrel!"

The brothers were seized with a fit of uncontrollable laughter, they would not be able to pretend it was a simple accident as they had discussed.

"You cannot let this insult pass," one of the friends told Robert as he huffed in anger. "You must teach those rascals a lesson, lest anyone think you are not man enough to control your brothers."

Robert shook as he strode over to grab a sword, unsure of whether he would use it on William and Henry at that moment. He meant to threaten them at a minimum.

"Come down here at once!" he blustered. "Learn to respect your elders and the heir to father's throne!"

The insult was too much to bear. A few of his friends tried to hide their laughter at William's response. The gallery nearly erupted when William strode in, holding the empty chamber pot.

"I've brought your helmet, dear brother," he taunted. Some of the men turned away, lest Robert see them about to burst from holding in their laughter.

Robert gripped the sword tightly and began to lift it when a sudden hush fell upon the room.

"Robert!" the king shouted. "What do you intend to do with that!?"

"Father!" Robert said, his voice lacking any reverence for the king. "I mean to teach your rascal sons a lesson they ought not soon forget!"

The king looked over at the boys. William was still holding the empty chamber pot, Henry was trying to hide behind his older brother. He needn't ask what had happened.

"What humor have you, Robert, that you cannot suffer the mischief of a young lad?" the king asked calmly. The king's face twitched as he saw the urine dripping from Robert's chin. He would not be able to hold back his smile for long.

"But father," Robert protested. "I scarcely doubt that your majesty had to suffer such indignities at the hands of your own brothers."

The king glared at his eldest son.

"Oui, my son," he said. "Humility is the first lesson I learned. I was taught it again and again, until it was certain I understood."

"Only then was I ready to come to this place and take what belonged to me," he explained.

Robert trembled with anger. He knew his father meant to spare his brothers any punishment. He gestured as if to respond, but the king cut him short.

"Now go, bathe yourself and speak no further on the matter," he ordered. "It is settled."

The king turned and winked at young Henry, offering him a slight smile.

Epilogue:
Robert Curthose, eldest son of William the Conquerer, never fully made peace with his brothers after that day in 1077. Not less than a year later, perhaps still feeling slighted over the incident with the chamber pot, he revolted against his father.

He would never become King of England, and his constant warring with his brothers eventually cost him his lands in Normandy. Within 30 years, the young Henry would become Henry I, King of England. Robert spent his remaining days as a prisoner of his youngest brother.

One could surely speculate that the chamber pot incident set the course of the relationship between Robert and his family, things were never the same between them after that day.
Return to Stories
Proudly powered by Weebly